One thing that you can only enjoy within the blockchain industry is our general sense of hope.

If you ask a crypto believer, they’ll tell you that, regardless of the current state of our economies, cryptocurrencies and blockchain technology can (and will) be of great aid to level the financial playing field. However, we tend to see this idea as something that will happen in the distant future instead of a reality.

It takes work to see beyond the world of the major banks, Elon Musks, and American regulations that make the news every day. However, there is much more to the world of crypto than the headlines will lead you to believe. In this article, we’ll explore the challenges that those dismissed by History and the media alike are facing every day. We’ll also touch on how developing nations in Africa are using the solutions of the future to solve problems in the now.

One of our favorite episodes of the Blockchain People podcast featured Nolwazi Hlophe, a financial inclusion expert and regulator from Swatini.

For an estimate of over one billion (with a B) people all around the world, identification is a daily struggle. A World Bank Group report states that 81% of these people, around 810 million (more than twice the population of the US), live in sub-Saharan Africa and South Asia. In Africa, this amounts to nearly half the population, five hundred million people who cannot identify themselves, most of them women.

If you dare to take this knowledge one step further, you’ll see that, for those that (to no fault of their own) didn’t fare well in the geographic lottery, the world is incredibly different to what you are used to. Particularly in Africa…

And, as you can imagine, the corruption and disorganisation in the continent (a heritage from colonial times) extrapolates to all areas of life. From birth certificates to land ownership, Africans have to go through life without certainties that allow them to organise most aspects of everyday life. Chaos then provides a fertile ground for power abuses to ensue.

Monetary policy in these nations is also, to say the least, challenging at times. Ten countries in Africa present inflation of over 10%. South Sudan and Zimbabwe register figures of over 50%, with the latter at 97%. Consequently, Africans avoid storing their savings in a bank, having little incentives to include themselves in the financial panorama.

This amounts to an entire generation practically pushed into cryptocurrency.

It could be that, when you think about Africa, you think either of remote jungles, endless yellow savannahs, or impoverished villages.

However, you might miss the picture that Africa’s tides are changing for the better thanks to the remote economy, cryptocurrencies, and information technologies, along with a booming young population.

And, just alike about any Millennial anywhere, young Africans spend quite some time on their phones. You might not know this, but mobile phone penetration in Africa is high enough to make sub-Saharan Africa the world’s fastest-growing area in mobile adoption. In contrast with the idea you might have of the region, 75% of the population is connected to mobile networks. 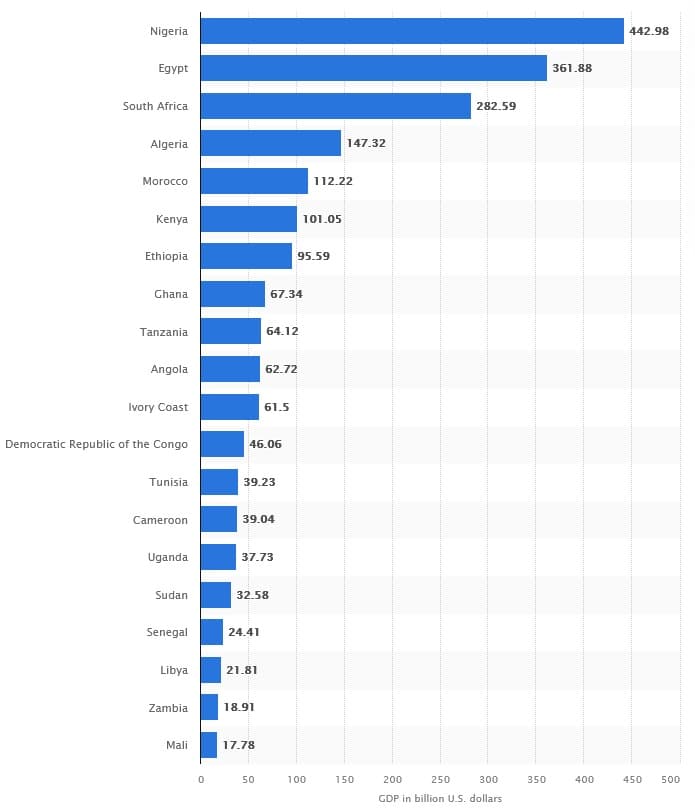 African economies are registering some of the highest-growth rates in the latest years. (Source)

The mobile boom has amounted to new opportunities for Africa to open up to the world and register the most significant growth rates in GDP worldwide.

For example, Nigeria (the highest GDP in Africa) grew to 443,000 billion USD in 2020. Egypt stands closeby with a GDP of 362 billion USD. Other nations standing among the regions’ giants are Morocco, Algeria, and South Africa.

Consensys’ lead for Africa, Monica Singer, also candidly speaks about the importance of cryptocurrencies in the region.

With weakened currencies in economies growing quickly, Africans are working hard to interconnect their respective nations, and cryptocurrency plays a large part in this. Remittances and currency hedging remain the two most important use cases for the technology.

It is no surprise that Nigeria’s highly connected, educated population stands out when it comes to crypto adoption. In fact, more cryptocurrency trading occurs in Nigeria than in almost any other country, only behind the US and Russia.In a country where more than 60 million people do not have a bank account, this upsurge has profoundly affected the millions seeking a way out of poverty. Nigerians also use cryptocurrencies as a way around foreign currency restrictions, a trend that has also been observed n in other high-inflation countries such as Argentina and Venezuela.

More so, African entrepreneurs (and even governments) are embracing the new possibilities.

In an early podcast episode, Chris R. Dawe from Effect.AI recounts finding out about Akon’s plans for Africa and being surprised at his legitimacy.

Perhaps one of the loudest proponents of this wave of technological revolution in Africa is Akon, the singer turned entrepreneur and philanthropist. Akon is currently leading the construction of Akon City, a futuristic city in Senegal incorporating emerging technologies that include cryptocurrencies and blockchains. The city will be powered by the cryptocurrency Akoin.

Akon Lighting Africa, another project by Akon, already helps 32.3 million people across Africa to access solar products to meet their electricity requirements. The project is already operating in 25 countries with plans to extend activities all across Africa.

Oh, did we forget to mention that Kampay did a podcast episode with us, as well? 😉

Other actors that stand out within the continent are:

Wala, a blockchain startup based in Capetown, South Africa, along with many other FinTech startups focused on solving the problem of remittances and overcoming the reliance on the legacy financial system.

For some places of the world, including Africa, the relentless abuse from their so-called peers has caused unimaginable damage. Undoubtedly, many generations will have to pass for Africa to recover from the past’s atrocities (if ever).

However, one can only marvel at the resilience of the continent. Within the last decade, African nations have made more progress than their more “advanced” counterparts. While the West seeks to disrupt the legacy systems that have established themselves as an intrinsic part of their societies’ blueprints, young Africans have a cleaner slate to work, dream and imagine. And, as it turns out, they see blockchain technology as the starting line to do just this.

The fact that Africa has chosen to disrupt their monetary systems for the re-design of its society speaks louder about the use cases than any article can. And, for those of us working alongside them, it’s important to celebrate their victories as if they were our own. They are.

Carlos Cano is D-CORE's Creative Lead and host of the Blockchain People podcast on D-CORE's platforms. He is a digital nomad and is responsible for all the creative materials you see from D-CORE. You can find him on Twitter.
August 8, 2021