Residents of Gold Coast, Australia will be able to pay their local taxes and property taxes could be paid by Bitcoin in the near future. It is Mayor Tom Tate that came up with the idea, despite the markets being in an open crisis, since he sees cryptocurrencies as the most effective hedging strategy against banks.

Bitcoin’s volatility does not seem to be a major concern for Australians, and the adoption of the leading coin in the market is currently seen as a turning point by the Gold Coast administration, which is especially aiming at the next generation of digital natives.

With a population of nearly 650,000 people, the Gold Coast is the sixth most populated city in Australia. First elected in 2012, Tom Tate was re-elected in 2016, and then again in 2020, demonstrating his strong popularity with the citizens of the city.

During the annual session to review city finances, the first citizen chose to speak to the younger audience—the ones whose interests are naturally associated with blockchain technology and cryptocurrency.

“Why can’t we pay rates on cryptocurrency if the risk is not high? The volatility is not that bad. It sends a signal that we’re innovative and brings in the younger generation … [but] I’m not saying we’re doing it, I’m just saying we’re always looking at the next level.”

These are the words used by Mr. Tate to clarify his position on this issue. Due to the difficult time the cryptocurrency markets are facing, this idea has generated discussion and skepticism despite its cautious approach.

Adam Poulton, the Managing Director at Blockchain Australia, encouraged the city council to carefully consider opening up to cryptocurrencies, citing their volatility. What Mr. Poulton said is that the last thing the council wants is to accept taxes in Bitcoin since its value could be halved in a short time.

The Australian land is one of the most bitcoin-friendly destinations around the world even though a good number of top Australian lenders have made it hard for crypto-related businesses to operate in the country during the past years.

Last November, Australian Senator Jane Hume praised the benefits of decentralized finance (DeFi) during the Australian Financial Review Super and Wealth Summit in Sydney, making it clear that the fast-evolving DeFi space presents a huge chance for the nation to cement its status as a “front-runner for innovation and economic progress.”

This kind of signal comes especially from Latin America, an extremely responsive land where there is talk regarding blockchain and cryptocurrency, due to previous political and financial matters. Not long ago we talked about the crypto turnaround in Brazil, where citizens will be able to pay local taxes in cryptocurrency starting next year. 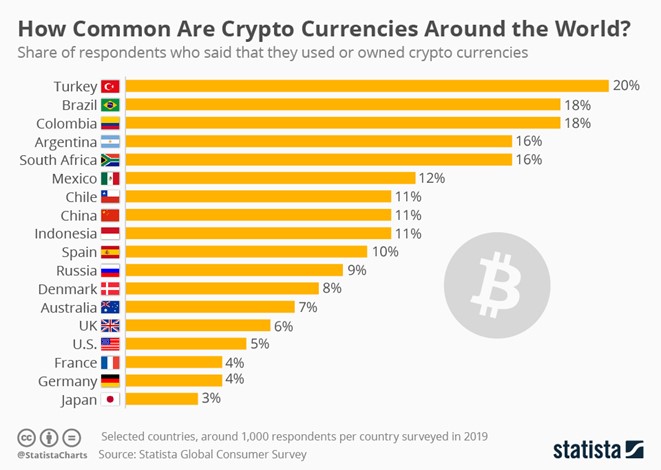 Source: Statista (How Common are Cryptocurrencies Around The World)

Something similar will be happening to their neighbors in Argentina, with the Buenos Aires City Administration welcoming the payment of local taxes in cryptocurrency giving a strong message to the whole fiat system and its heavy influence on the economies of the South American countries.

It is a journey that has been even faster in Lugano, where the Swiss city almost making Bitcoin a legal tender and recognizing stablecoins such as Tether and Luga—the city’s digital currency. Moving back to the United States we can find Miami and New York City, which, like Lugano, have their own cryptocurrencies, despite the up and down successes of the two currencies.

Carlos Cano is D-CORE's Creative Lead and host of the Blockchain People podcast on D-CORE's platforms. He is a digital nomad and is responsible for all the creative materials you see from D-CORE. You can find him on Twitter.
June 9, 2022