Crypto has finally arrived on the Fortune 500. Coinbase made history when it became the first cryptocurrency company to make it to the Fortune 500. Coinbase ascended to 437th place on the list in 2021, with slightly over $7.8 billion in sales. Coinbase came in second on the list with revenue growth of 514%, followed by Moderna. During the rough trend throughout the first quarter of 2022, Coinbase sustained losses. Thus, there was uncertainty that it would not make this year’s list at this pace.

The San Francisco-based Coinbase Global, Inc. is the biggest cryptocurrency exchange in the United States by trading volume. It was founded a decade ago by Brian Armstrong and Fred Ehrsam. The company isn’t simply just into cryptocurrencies. Coinbase NFT, a marketplace where NFT collectors buy and sell their pieces, and Coinbase Pro, a professional asset trading platform for digital trading assets, are two of the company’s products.

Coinbase has significantly benefited from the growing popularity of cryptocurrencies. It applied for a direct listing on April 14, 2021, when the cryptocurrency sector was booming. The company went public at a $381 starting price. Moreover, it had advertised itself as a go-to site for investing in digital assets before the overall crypto market cap surged beyond $3 trillion in November.

Bitcoin has been at its lowest price since Coinbase (COIN) went public in April 2021. Since November’s market high, shares have dropped more than 80%, and Q1 revenue was less than half of the previous quarter’s total. The monthly transacting users declined by 2 million.

Coinbase has joined the ranks of the major financial institutions

Even though bitcoin, including Coinbase, appears to be entering a bear market in 2022, this is still excellent news. It is elevating a cryptocurrency company into the realm of true giants. Walmart ($572.8 billion in revenue), Amazon ($469.8 billion), and Apple ($365.82 billion) now hold the top three spots on this ranking. 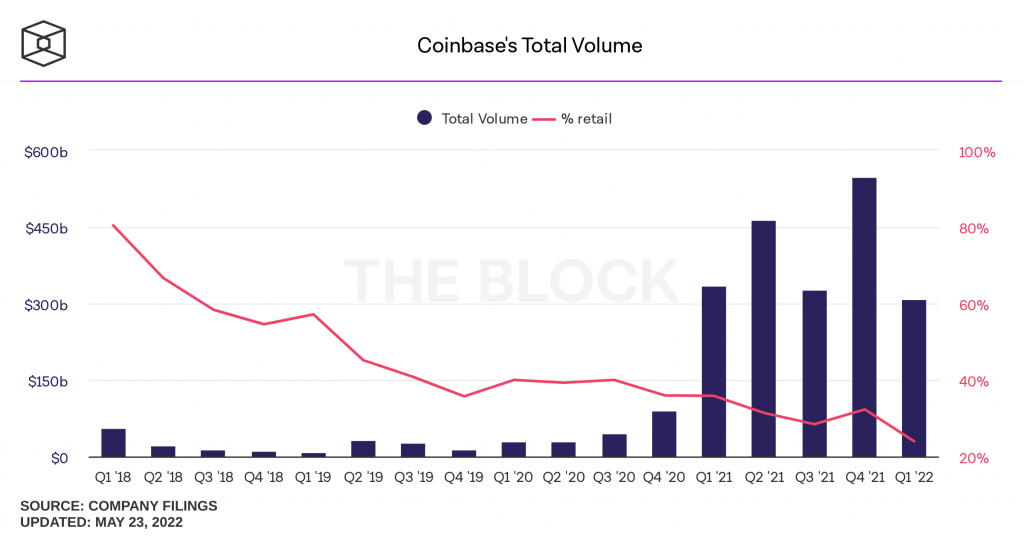 Will Coinbase be able to sustain this coveted position in 2022?

So far, things do not appear to be looking up. The company recorded net revenue of $1.16 billion for the first quarter, which fell short of analyst estimates. It was a 53% decrease from the $2.5 billion recorded in the fourth quarter of 2021. If its first-quarter performance continues, it will not be enough to make this year’s list. Of course, the market and Coinbase are always subject to change, so this remains uncertain.

However, Coinbase seems untroubled. Last Wednesday’s pinned tweet mocks individuals who believe the cryptocurrency business is “dying.” In a blog post the same day, Coinbase Chief Marketing Officer Kate Rouche said, “Volatility is painful and can be scary. But, Volatility is needed for emerging technological breakthroughs like crypto.”

Overall, Fortune magazine has been publishing a list of the top revenue-generating firms every year since 1995. Coinbase’s inclusion on this famous list of household companies is a piece of thrilling news for crypto enthusiasts. Although it is a well-known cryptocurrency exchange, it is just one of many. Coinbase’s massive trading activity, growth prospects, and foray into the NFT industry provide a strong foundation for sustaining market volatility and well-functioning. It will be fascinating to see if Coinbase makes it to Fortune’s 2023 list or not

Carlos Cano is D-CORE's Creative Lead and host of the Blockchain People podcast on D-CORE's platforms. He is a digital nomad and is responsible for all the creative materials you see from D-CORE. You can find him on Twitter.
May 25, 2022