2021 might be the year you started hearing about Decentralized Autonomous Organizations (DAOs)… and you will likely continue to.

Sometimes called decentralized autonomous corporations (DACs), the term DAO refers to organizations represented by a transparent set of rules encoded on the blockchain. These autonomous organizations are controlled by the organization’s members, not ruled by any external government, and are also typically open source in their coding

DAOs are, at the time of writing, not recognised by any national governments and have an unclear legal status. However, they are currently broadly utilized in DeFi and have been recognised by proactive jurisdictions, such as the American state of Wyoming, which has helped put them back in regulators’ minds.

So, how do Decentralized Autonomous Organizations work? Why should I care about them? 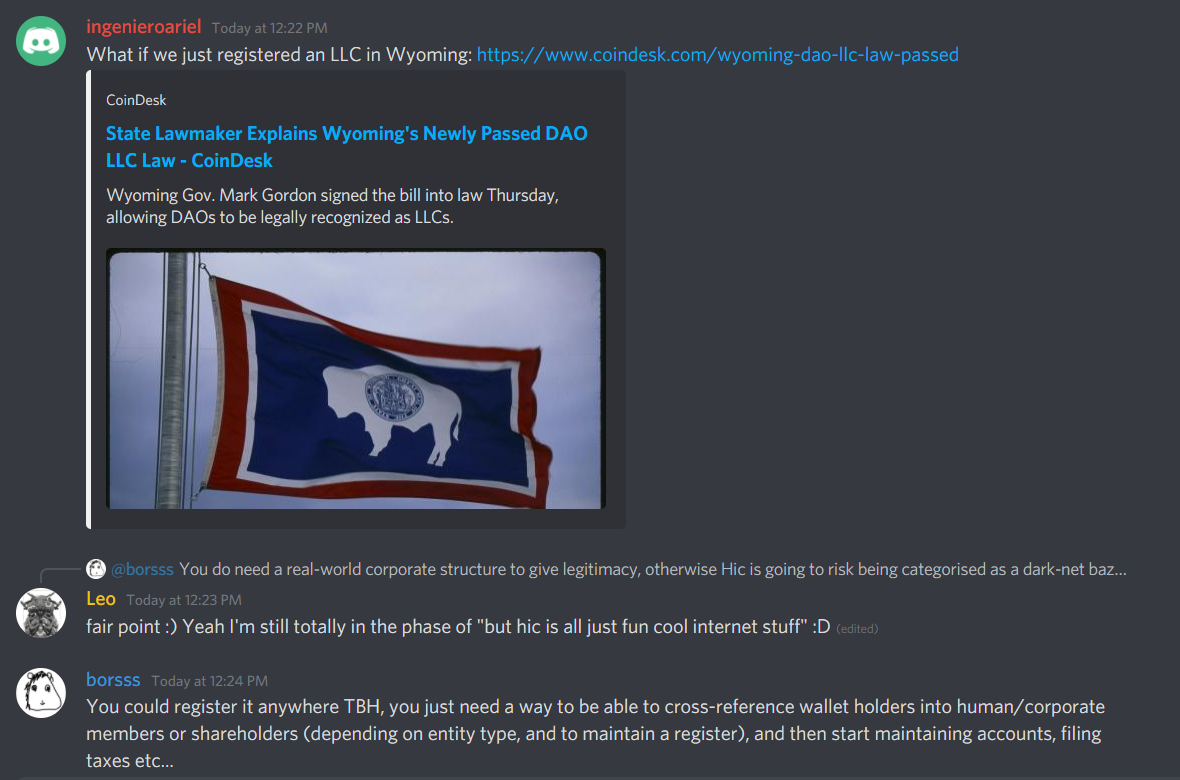 DAOs are, in short, a technology-enabled way for people with mutual interests to practice direct democracy. We can break down this sentence to learn more about their particularities:

In general (although there are many models) DAOs empower platforms and organizations. They often operate by weighted voting according to stake-holding, increasing the weight of the voting power of users with a higher stake in the organization. A typical DAO business model would work by issuing specific DAO governance tokens that users in the secondary market can purchase or that can be accessed as rewards by users that perform tasks of the interest of the DAO.

Typically, DAOs work through proposals: If a proposal receives enough votes (depending on the DAO’s set of rules), it is implemented. They can also have different ways of weighing votes, processing outcomes (such as thresholds) and vetting members to avoid collusion by multiple accounts or manipulation by major players.

DeFi projects often have an ultimate goal to become, or are in the process of turning into, DAOs.

How do Decentralized Autonomous Organizations impact the experience of the average blockchain user? What are they useful for?

Since DAOs are a form of direct democracy that requires heavy involvement, it’s no wonder that they aren’t the most efficient solution. Many have expressed their opinion that, although they fulfill the ideal of decentralization and localism beloved by the blockchain technology community, they can be a bit of a hassle.

On our podcast Community Special about the upcoming Monero DEX, Haveno, we discovered that both founders agreed not to have a DAO under the reasoning that this would slow down the development process.

There are also obvious concerns from users (particularly those new to the space) that might not necessarily like that their assets are locked in platforms without a hierarchical structure of governance. In this way, Decentralized autonomous organizations are a social experiment aiming to determine if such procedures are possible, leverage technology to empower decision-making, test different levels of decentralization, and understand whether the model is able to outperform competitors.

A DAO could be useful for:

Surprisingly… some of these examples exist! We sourced some of the information here from DaoHaus, a platform used to create and host DAOs.

At this point, it might be worthwhile to take a look at the most important DAOs in the blockchain universe and how they’re used.

What are the most popular Decentralized Autonomous Organizations and what do they do?

The top five DAOs encapsulate billions of dollars in market capitalisation (via CoinmarketCap).

Taking the image above as a reference point, let’s look at what the top projects governed by DAOs are, what they do, how they utilize their native tokens, and what the main responsibilities of the organization are.

Uniswap: The king of Decentralized Exchanges

Uniswap is the #1 project based on Ethereum in market capitalisation. It’s also the most popular Decentralized Exchange, making it a great use case for a DAO. In Uniswap’s governance platform, users propose changes to be implemented by the team using the governance token, UNI.

Uniswap is not entirely governed by the DAO, which means that it still has a team that manages it and holds control over the platform. In fact, Uniswap began as an independent platform without a DAO and only recently introduced this governance model. This is known as progressive decentralization and is a process that many entities in crypto are undergoing. 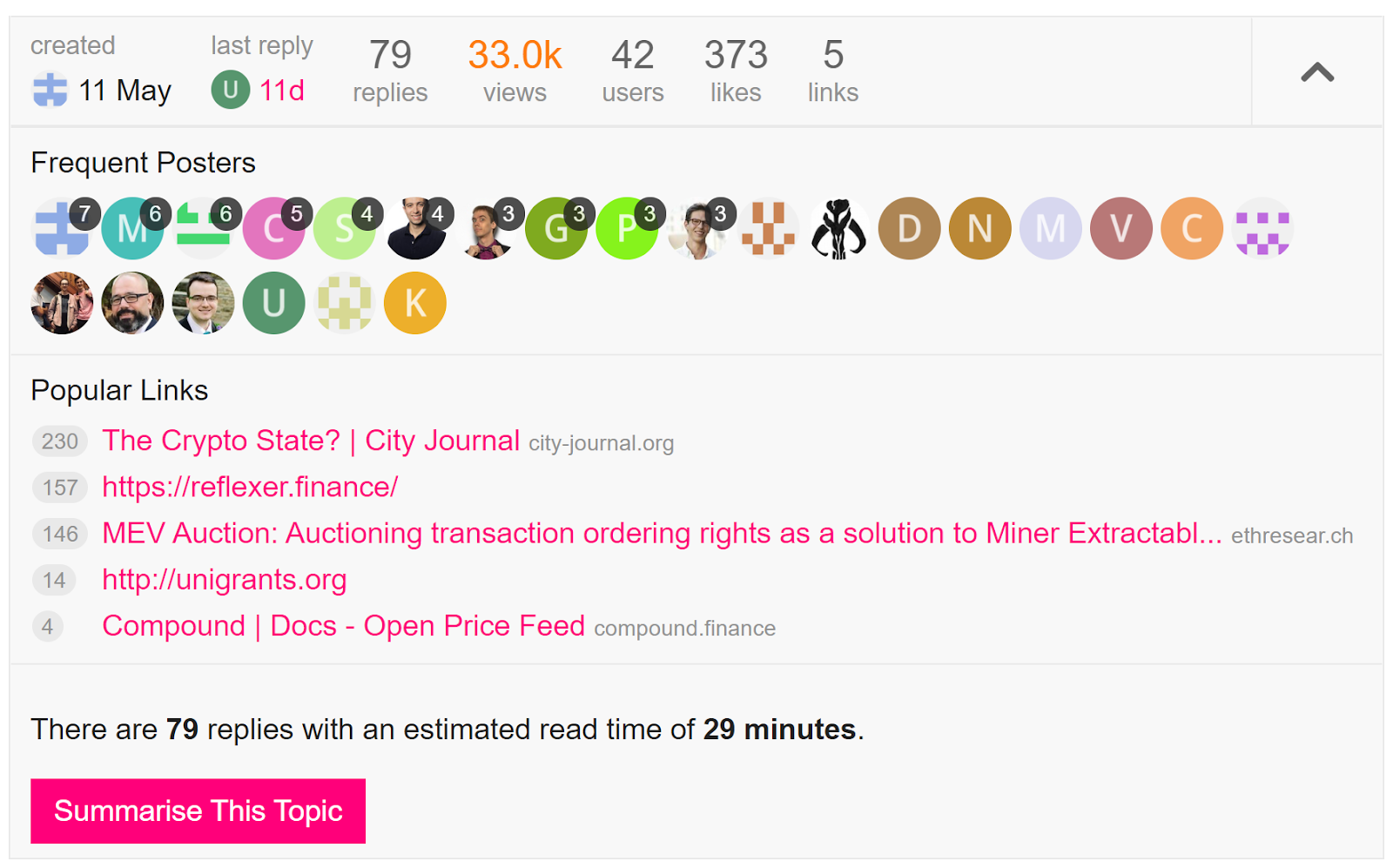 Example of a proposal in the Uniswap governance platform.

Aave, the project in DeFi with the highest Total Value Locked (TVL), also introduced a DAO governance. It enables token holders to vote on changes and upgrades to the Aave Protocol.

Aave allows users to earn interest on deposits, as well as to borrow assets. The protocol also pioneered Flash Loans, a novel feature aimed towards developers and those performing arbitrage.

Aave is also undergoing progressive decentralization, as mentioned in their official documents: “The goal of the Aave Tokenomics, through its incentives and policies, is to create a Shelling Point where the protocol’s growth, sustainability and safety take priority over individual stakeholder objectives.“

Maker is one of the oldest DeFi protocols, one of the first to pursue the DAO model, and it might be the first major project to reach complete decentralization. Maker launched intending to create a decentralized system to issue the first algorithmic stablecoin (DAI) using only crypto as collateral.

In the present, the Maker foundation holds less than 1% of the total reserves, with the rest being in the DAO’s hands. Maker’s DAO has also been responsible for the platform’s adoption of other tokens, including real-world assets (RWA), such as tokenised real estate, to be used as collateral.

Conclusion: Is the world moving towards a Decentralized Autonomous Organization model?

Someone that is incredibly pro-DAO and has also been on our podcast is Kevin Owocki, Founder of Gitcoin. Gitcoin has a special system to match public and private donations to public-good projects in Ethereum.

It’s been a while since the world saw Ethereum Classic, a hard fork from the original Ethereum project, appear thanks to a 50 million dollar hacking attack attempt to The DAO, a Decentralized Autonomous Organization built for Ethereum’s blockchain. This phenomenon had a significant impact in halting the development of DAOs, which seems to be long gone. The Securities and Exchange Commission (SEC) also seems to have decided to overlook DAOs’ activities, at least for the time being.

As our world becomes more connected, moves faster, and adopts new technologies, it is not unfeasible to think about DAOs becoming the predominant structure.

Something quite revealing about the wave of adoption that we are witnessing is that, as legal systems begin their scrutiny over DAOs, there is an apparent demand for special considerations, as a Wyoming Senator noted. This occurs because, despite the efforts to categorise them into the existing LLC class, the status leaves out fundamental particularities of the decentralized organization. Indeed, we might soon see the creation of DAO-specific regulations and even sub-classifications among them.

The leading proponents of DAOs cite their importance as a replacement for the ‘paper’ corporation (or even government). They also note the milestones that can be achieved by DAOs with enough members to make decisions at a local level quickly. On this note, one suggestion was the idea for El Salvador (of Bitcoin and surfing fame!) to enact a DAO in which any citizen could participate to make other cryptocurrencies legal tender.

Regardless of the likelihood of governments running countries on-chain anytime soon, the many use cases for DAOs showcase that composability with other options based on blockchain technology will play a part in popularizing them. Right now, if El Salvador wanted to pursue the idea above (first proposed by Balaji Srinivasan) it could do so by almost solely utilizing blockchain-based alternatives for discussion, voting, identity verification, and parts of the execution. This showcases the fact that, as on-chain solutions and dApps advance, the potential reaches and its utilities follow.

Decentralized autonomous organizations are now also growing in popularity, emerging as a community-bootstrapped alternative that is more inclusive than Venture Capital firms.
Michael Steinberg, founder of Venture Capital firm Reciprocal Ventures, has said that “crypto venture capital is a full-time job. VC firms are generally very active, highly engaged, and have lots of time and resources to devote to portfolio companies. We’re all for partnering with DAOs, but some founders need playbooks” about how VC firms are DAOs seem to grow closer day by day.

To the knowledgeable, the DAO debate is a matter of how and when, rather than if. And, to the trained (laser) eye, a regulation proposal is an olive branch for the industry set to rebuild the world as we know it.

Carlos Cano is D-CORE's Creative Lead and host of the Blockchain People podcast on D-CORE's platforms. He is a digital nomad and is responsible for all the creative materials you see from D-CORE. You can find him on Twitter.
July 9, 2021