Our last article about Decentralized Finance (DeFi) explored the concepts and ideas that make this emerging trend remarkably attractive as the evolution of Traditional Finance (TradFi). This time around, we’ll talk about one of the most critical tools in the DeFi belt: The Decentralized Exchange, or DEX.

It is well-known that crypto exchanges are, for most users, the gateway to cryptocurrencies and an everyday tool. Indeed, one of the essential functions that an exchange serves is receiving national currency deposits in exchange for cryptocurrency. The possibility of doing business by facilitating these transactions motivated the origin of crypto exchanges (such as Coinbase or Binance) controlled and operated by private entities.

This ondequando image showcases the volume and competition between DEXs.

A number of the most commonly cited caveats of CEXs are:

Centralised exchanges are operated by entities responsible for the holdings of their users. Users have to, essentially, hand over their funds for CEXs to manage them. CEXs are therefore usually accountable for securing billions of dollars worth of assets, making them obvious targets for hackers and theft.

A cautionary tale for users trusting CEXs is the famous downfall of Mt.Gox, once the world’s largest exchange, after being hacked for 850,000 BTC. Because of this, it’s often advised that long-term investors hold their cryptocurrency outside exchanges or using non-custodial solutions.

Unlike P2P transactions, CEXs charge transaction fees for their services and convenience (often only at the time of withdrawal or deposit of fiat, but sometimes at other instances), which can be an issue when handling large amounts.

3. Need for trust and permission

Perhaps one of the most important reasons for the evolution of DEXs is that, since CEXs have to adhere to their jurisdictions’ regulations, they often have to limit users’ abilities within their platforms. This is usually through the vetting of tokens to be listed, requiring KYC and AML procedures to start operating, the possibility of shutting down users’ accounts, pressures from local governments to hand over transaction records, and a long etcetera.

Since CEXs are often avenues for trading, users have a reason to suspect that, were one of them to have malicious intentions, their platforms would give them an ideal position to manipulate their internal markets. Of course, this also means that this translates into the general crypto market in the case of prominent exchanges.

What are Decentralised Exchanges?

The most popular DEX in the market, Uniswap, is famous for its simple interface.

Decentralised exchanges are cryptocurrency exchanges that exist solely as code on the blockchain, allowing users to transact based on P2P mechanisms and connecting only through non-custodial solutions. Therefore, DEXs users maintain control of their funds at all times.

In general, DEXs, by holding no funds, are at less risk of being hacked or attacked by third parties. DEXs are also friendlier towards blockchain projects since they allow them to access high-liquidity markets without listing fees or procedures, based solely on the community’s willingness to create a market for the project and its own resources. This eliminates a problem common just a few years ago, when projects would have to pay millions of dollars to get a token listed on a centralised exchange.

Another key factor behind DEXs’ popularity is that, thanks to their P2P nature and the ease of aggregating different solutions together using smart contracts, DEXs can create direct currency pairings for almost any cryptocurrency in the market.

Current DEXs implement varying degrees of decentralisation: Some might use centralised servers to host order books and other features while remaining non-custodial. There are also hybrid solutions in which the exchange itself is decentralised but it is maintained by a centralised company. Some of the most popular DEXs in the market include Uniswap, SushiSwap, Curve Finance, Pancake Swap, and Mdex.

Although CEXs handle most of the market activity, DeFi’s irruption created a space for the development of DEX protocols and aggregation tools. Platforms like Uniswap, Curve, and Balancer showcase the potential of simple, user-friendly platforms that rely on liquidity protocols rather than order books. As the DEX market matures, the proliferation of new protocols and supporting mechanisms will likely only accelerate.

DEXs do not store users’ funds on the exchange but instead allow users to execute P2P transactions without a third party or intermediary. Thanks to the fact that they can exist without storing users’ funds, decentralised exchanges are preferred by some.

However, decentralised exchanges do not facilitate the trading of fiat currencies for cryptocurrencies, known as on-ramping.

Why do some decentralised exchanges revolve around a certain currency?

There are two types of DEXs: currency-neutral and currency-centric. Currency-centric exchanges are specific to the blockchain escrowing its native currency. The blockchain can be Ethereum, Monero, Waves, BSC, or any other smart-contract-enabled blockchain. For example, Uniswap is native to Ethereum.

Currency-neutral DEXs like Block DX are not tied to any one blockchain. They can be built on top of several blockchains and are not limited to a specific coin’s ecosystem. This “modern” setup brings about secure order matching, transparent handling of order books, and decentralised asset exchange.

How a Decentralised Exchange (DEx) Works 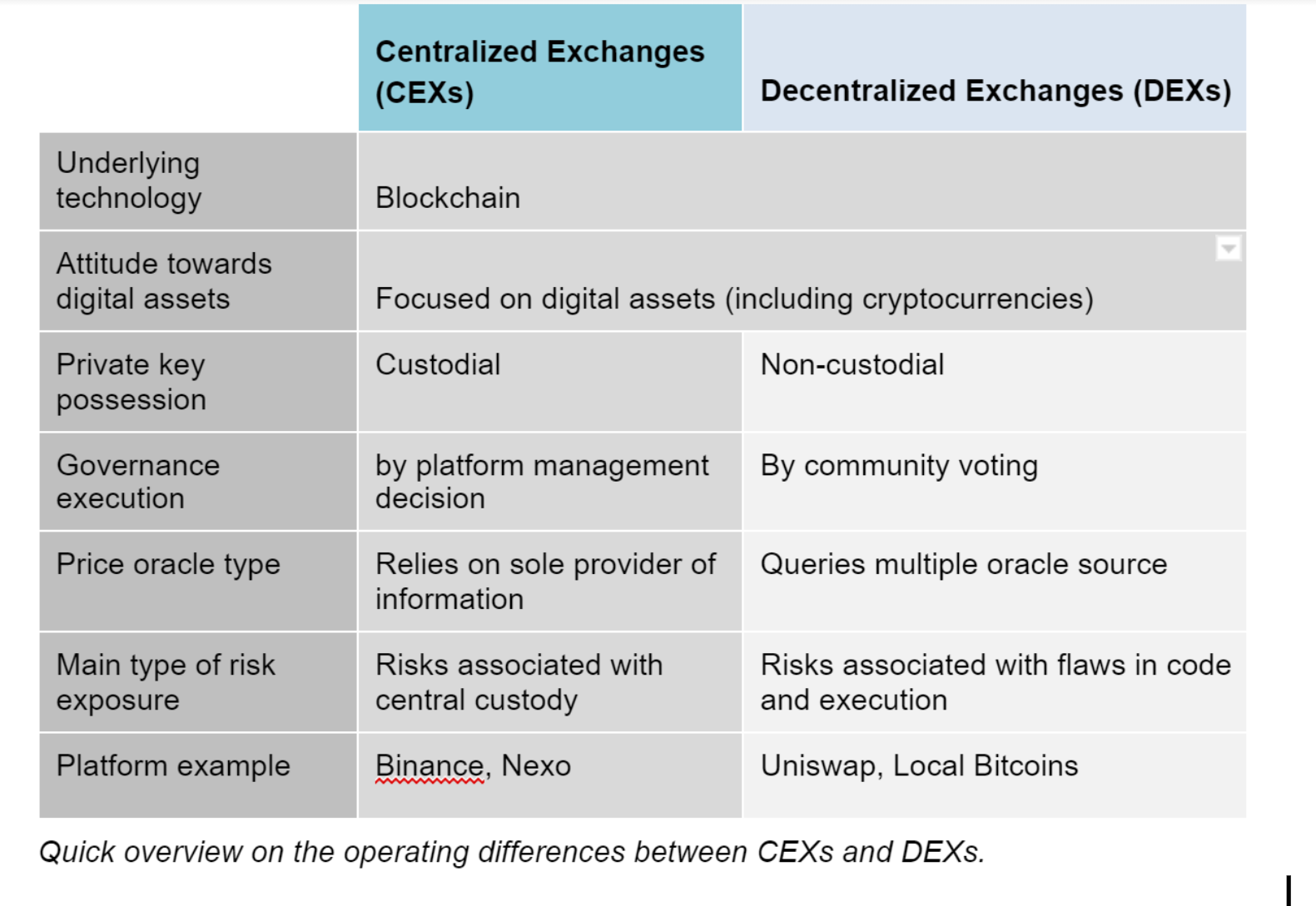 As we specified above, DEXs are non-custodial, and therefore allow crypto investors to maintain control of their assets at all times. This, in a nutshell, is thanks to liquidity setups that connect order books to liquidity pools. There are also some DEXs that use the conventional order book models.

DEXs rely on smart contracts to execute trades. There is a current trend towards building aggregation tools to address the disjointed liquidity inherent in decentralised exchanges. DEXs also enable instantaneous trades. However, since they’re (for the most part) reliant on their native blockchains, they can fall prey to their limitations, as has happened with the recent spikes in Ethereum fees (which ETH 2.0 is set to fix).

The fact that DEXs only exist on-chain also means that most of them have limited counterparty risk and are not required to follow KYC or AML procedures.

To finish this article, let’s go over the advantages and disadvantages that DEXs present:

Users of DEXs do not have to transfer assets to a third party. Therefore, they eliminate the risk of a company, person, or organisation being a victim of a hack. This, however, doesn’t mean that they’re risk-free, since the smart contracts that host them could be faulty with bugs and be subject to exploits. Notably, however, this means that DEX security relies on perfecting code, as opposed to being an ongoing process.

Decentralised exchanges are transparent code that can be audited by anyone, hence preventing market manipulation and protecting users from fake trading and wash trading.

Users are able to use DEXs without registering any of their private information, and therefore anonymously.

4. Permissionless participation for users and projects

As we mentioned in the previous sections, users can access DEXs with little to no barriers. This is also true for projects that can list their cryptocurrencies and tokens directly on the platforms using decentralised tools, surpassing a system that previously charged massive listing fees.

Users of decentralised exchanges must be the sole holders of their keys and passwords to their crypto wallets. This implies that they absorb the whole risk of losing them. It also means that they’re responsible for learning and getting acquainted with the technologies that they’re handling.

We did a very special podcast episode with the Founders of Aluna, a social trading platform that aims to be incredibly simple. Both of their founders mentioned the many challenges that DEXs pose in this respect.

Decentralised exchanges do not allow for the direct trading of fiat currencies. They’re, therefore, not a way in which users can invest in cryptocurrency directly. Some, however, allow users to purchase cryptocurrencies using fiat in P2P transactions outside the platform thanks to escrow systems.

Since most DEXs are hosted on the Ethereum network, currently undergoing scalability issues (a problem that’s promised to be solved with the release of Ethereum 2.0 in the near future), high network traffic can cause the fees required to run transactions on these networks to be as high as $200 at their peak. Other networks promise to solve this problem but, at the time of writing, they have not built the sufficient number of users, reputation, or delivered to scale up to their purposes.

Carlos Cano is D-CORE's Creative Lead and host of the Blockchain People podcast on D-CORE's platforms. He is a digital nomad and is responsible for all the creative materials you see from D-CORE. You can find him on Twitter.
July 5, 2021