Why don’t we have a decentralized social media platform already?

Whenever we hear about the latest deplatforming on Twitter, abuse of power by Facebook, or unfair rule upheld by Youtube, we know that the armies of crypto enthusiasts will utter a cry to get a decentralized version of the same platform up and running. However, once you think about this issue in-depth, you realize that achieving this is a lot more complex than it seems.

There are a few problems at hand:

But, perhaps most importantly (and this is the topic we’ll cover for the rest of this article), there are two pieces that tend to go unconsidered and that stand in front of every decentralized platform aiming to rise above the noise: Governance and policing.

Is policing the greatest problem with decentralized social media?

In this clip from our podcast, we examine whether Reddit’s initiative to introduce a crypto-based rewards system was positive for its ecosystem. Our guest was none other than Justin Ehrenhofer, moderator of Reddit’s cryptocurrency community.

If you start thinking about it (and Satoshi knows we have!) decentralized social media sites’ most significant problem is avoiding collusion from users, which can ruin the platforms for everyone. Adding cryptocurrencies to the mix just makes this harder. Think about what could happen in a decentralized platform if…

And so, we arrive at the quid of the matter. If policing to any degree is necessary, then who does the policing? And who mediates between users and the platform in case there is a disagreement? Who appoints moderators, and how can the rules be enforced in a way that’s better than what established platforms offer?

Well, it turns out that decentralized justice solves all of this

Another guest in the Blockchain People podcast was Federico Ast, creator of decentralized justice platform Kleros.

Decentralized Justice is perhaps one of the noblest use cases for blockchain technology. Just a few of its possible applications are:

Of course, these are all pretty big claims, and we’re talking about decentralized social media. So, for the sake of simplicity, we’ll stay on this specific use and try to build from there to explain how decentralized justice works. You can then take this logic and apply it to the rest of use cases. For in-depth explanations, you can go to the whitepapers of Kleros or Jur, the two biggest competitors in this space.

Why is decentralized justice needed in the first place?

An uncomfortable truth of blockchains that we learned the tough way is that smart contracts, in and out of themselves, are not enough.

In blockchain land, we love to pretend that everything’s going to be solved by decentralized machines running automated programs based on cryptocurrency. And, for the most part, this actually holds up! Some applications of the technology have shown that smart contracts are great for implementing near-perfect efficiency in markets and in anything that we can automate. And, with oracles taking care of feeding the machines more and more data, we will likely be able to expand what we can automate further and further as years go by.

However, some things machines are just not good at. A machine can beat you in a finite game with well-defined rules and a limited number of possibilities (even if they seem far too great for your human mind), such as chess, but it has trouble noticing whether the furry mammal sitting on your lap, meowing, and that eats cat food, is a cat or the latest physical print of David Foster Wallace’s Infinite Jest. It takes tremendous effort, development, and it is crazy expensive to develop AI to do things that humans can do in seconds, such as:

Hence, companies (and even governments) have no other option but to hire humans to perform these tasks.

And, sadly, humans hired to solve disputes tend to like to stay employed

If a company hires an arbitrator, chances are that they will have their employer’s interests in mind above fairness.

Now we’ve gotten to the juicy part. Just as you suspected, the billionaires and centralized systems of the world hire people to police their platforms. And, these people, in fact, have mouths (including their own) to feed, so they rather stay out of trouble by not going against their employer’s wishes.

More so, arbitration systems tend to have several failures of their own:

When’s the last time you heard about a company hiring more employees than necessary to make sure they’ll be able to keep up with support tickets? What often happens is that these tickets will create a queue that can span for months on end (just go to r/Binance if you don’t believe us!)

We covered this before. In a dispute that’s a close call between who’s right, you or Amazon, an Amazon arbitrator has an incentive to benefit their employer, a central authority.

Arbitrators are often incentivized to enforce the playbook to its every word, not to exercise common sense.

When you only have one arbitrator, he or she could be having a bad day, misjudge, or not like you and err (incorrectly) against you.

We know what you’re thinking now: That’s all (for the most part) reasonable, but how does crypto solve this?

Now that you have all the core concepts, it’s time for you to learn about the real applications of Decentralized Justice.

Back to our social media platform, let’s say we, D-CORE, come up with an idea for a decentralized video website to combat the censorship of the single mainstream solution. Yay! We build our platform to be blockchain based, and call it D-Tube. Let’s assume that, for the most part, our policies are identical to Youtube’s, which you already know. And, since we realized that the problem of moderation is troublesome enough for us to tackle, we decided to plug into a decentralized justice platform.

Within this platform (with hybrid rules in between Kleros’, Jur’s, and others’).

Now, let’s suppose that within D-Tube, which is reasonably populated and successful, a user chooses to upload a cover of a Justin Bieber song. Their cover sounds eerily similar to the real thing, enough for some users to suspect OP’s (Original Poster) use of playback. Now, within Youtube, this content might have been immediately flagged as copyright infringement by an AI that’s fueled by the technology and logs of record labels. After all, it is in their best interest to protect their assets from plagiarism. Let’s say, for simplicity’s sake, that the same happens on D-Tube. The process that would ensue looks as follows:

So, why is decentralized justice not implemented more broadly? 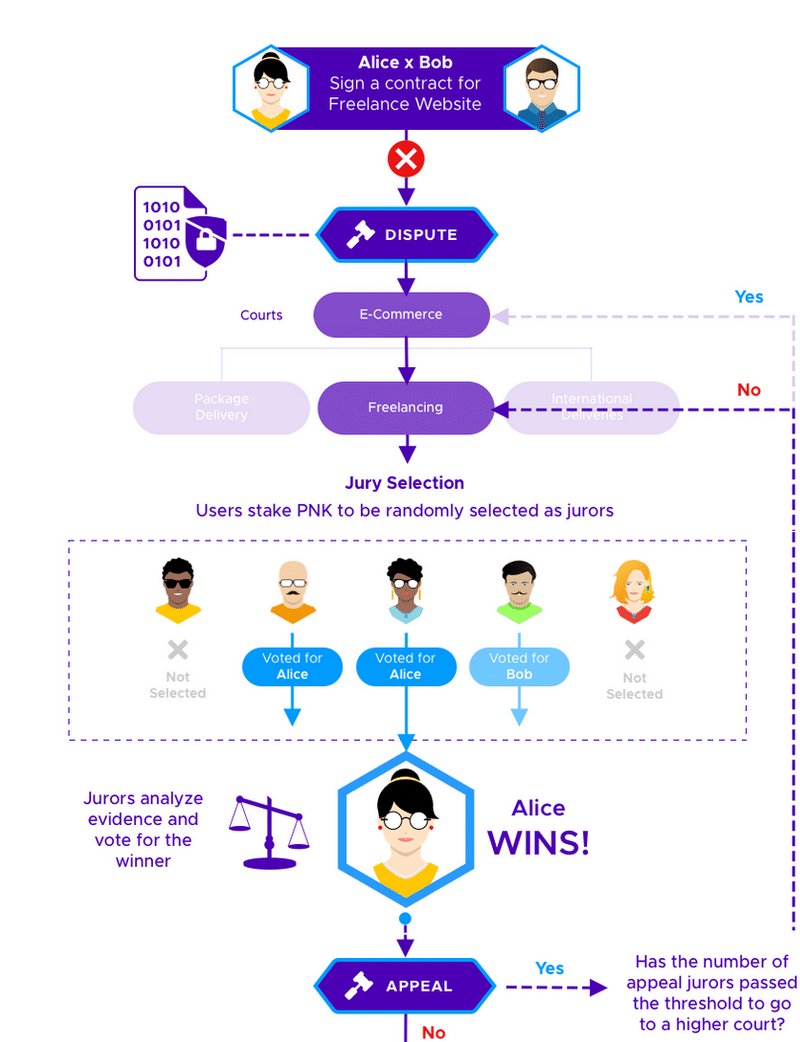 This diagram from Kleros illustrates how their system would work to solve a freelancing dispute.

We talked about scaling at the beginning of this article, so we’re not about to repeat ourselves by stating the obvious: Decentralized social media cannot happen until scaling meets this need. However, policing will become the next big issue when it does so, and we’re happy that there are systems in place to cover this need.

Let us, then, close this article by leaving you with a question: Should all things stay the same… Do you think the average, ambivalent-to-crypto users would have an incentive to jump into a decentralized platform? Do you think this is a value proposition strong enough for users to mass-coordinate into a new, unknown platform?

If your answer is a “no” or a conservative “I don’t know” (remember, it’s millions of people we’re talking about here!), then it’s time to start wondering. Ask yourself: What use cases and unique applications can blockchains have within decentralized social media to make it worth the change for everyone, from your local waitress to a Polish musician to the founder of Polkadot, Gavin Wood? It is likely that the first successful platform is something entirely different, as opposed to a spin-off of what we already know.

We hoped you enjoyed reading this as much as we did writing it!

Carlos Cano is D-CORE's Creative Lead and host of the Blockchain People podcast on D-CORE's platforms. He is a digital nomad and is responsible for all the creative materials you see from D-CORE. You can find him on Twitter.
August 31, 2021