The launch of GBPT, a stablecoin, was announced by Tether on Wednesday. With the addition of a new cryptocurrency tied to the British pound sterling, Tether is expanding its stablecoin offering. The new GBP-pegged stablecoin, will go live in early July and be first supported by the Ethereum blockchain.

The British Pound Sterling will be a stable digital asset tied 1:1 to GBPT. According to Tether’s official announcement, the dedicated team behind Tether USDT will create GBPT, which will run on a tether.to. By establishing GBPT, British Pounds will be added to the blockchain and made available as a quicker, more affordable option for asset transfers. Created in 1694, the British pound sterling is the world’s oldest fiat currency and serves as the basis for the GBPT.

Controversies around the stablecoin
Notably, USDT from Tether was among the first stablecoins to appear on the cryptocurrency market. It has acquired popularity over the years and is now the third-largest cryptocurrency and top stablecoin, with a market worth of more than $68 billion. The Chinese yuan-pegged CNHT, the recently introduced Mexican peso-pegged MXNT, and the euro-pegged EURT are other Tether stablecoins.

Stablecoins have recently been propelled to exhibit their stability despite their success. It happened after Terra’s algorithmic stablecoin de-pegged from the dollar and fell below $0. Concerns have also been raised about the stable coin’s ability to help with the enormous redemptions brought on by the current market collapse. Since Tether was an early investor in the project, concerns have also been raised about USDT’s ability to withstand the Celsius storm.

However, the CTO of Tether, Paolo Ardoino, stated that he believes the United Kingdom is the next frontier for blockchain innovation and the more comprehensive execution of cryptocurrencies for financial markets.

Increased USDT supply on exchanges
The availability of USDT on exchanges has increased recently, according to data from on-chain analytics provider Santiment. It indicates a strong purchasing power. Thus, it shows that stablecoin is gaining acceptance by the general public. In the meantime, the supply of Bitcoin (BTC), which is still trading at roughly $20K, has reached a 2018 low on exchanges.

These two events indicate that more investors are using USDT to buy cryptocurrencies via exchanges. They are also shifting their Bitcoin from exchanges to wallets or holding it. These occurrences occur when market bears exert pressure, inflation rises, and a worldwide recession is approaching. The Fed’s quantitative tightening policy may directly impact the fluctuations in USDT and BTC supply on exchanges.

With a market cap of $68 billion, USDT is now the largest stablecoin. The project just went live on the Polygon network. Over the past two months, more than 12 billion USDT have been withdrawn. Tether’s global volume today (as dated) is roughly $40.9 billion over the last 24 hours, compared to the entire crypto ecosystem’s $76.5 billion trades on Wednesday. USDT commands a substantial trade volume. Out of 13,471 crypto assets, USDT has the third-largest market cap out of the $956 billion cryptocurrency industry, dominating by 7.035%. 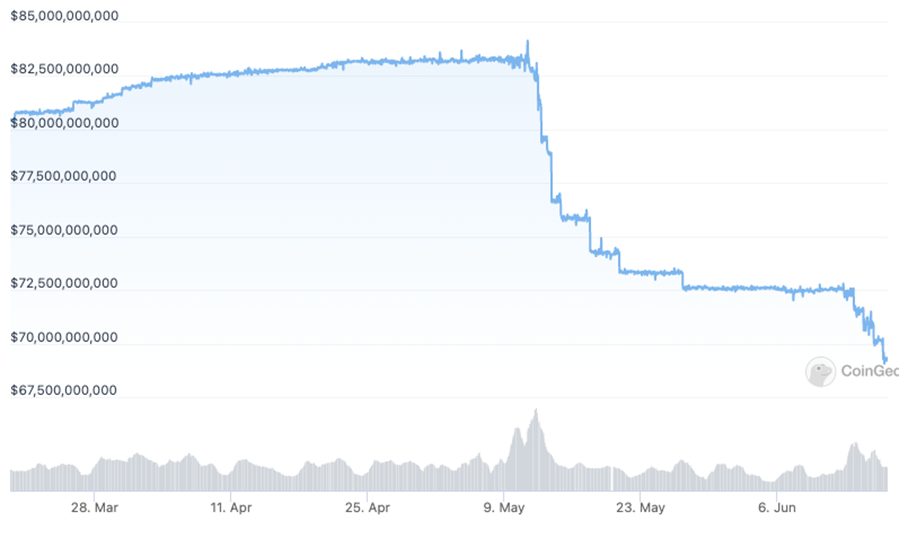 To conclude, stablecoin was worth more than $80 billion in May 2022. With the launch of GBPT, Tether envisions participating in industry innovation in the UK, where stablecoins will soon be accepted as payment.

Carlos Cano is D-CORE's Creative Lead and host of the Blockchain People podcast on D-CORE's platforms. He is a digital nomad and is responsible for all the creative materials you see from D-CORE. You can find him on Twitter.
June 24, 2022