Over the past few weeks, the rapid downfall of one of the biggest US dollar-pegged stablecoins, Terra USD, slammed the crypto market. In the fallout of the UST debacle, other stablecoins also started losing their respective pegs and few saw significant levels of redemption, seeking a broader review of the market and a deeper understanding of what stablecoins are and how they work.

Though there are stablecoins out there that provide security and trust, the overall reputation of stablecoins is at stake. Unfortunately, the downfall of Terra USD has pushed the mass adoption of decentralized finance back a few years.

Before digging into the current market situation, let’s dive deep into the basics of stablecoins.

How do stablecoins work?

Stablecoins are digital currencies that are designed to maintain a one-to-one peg to a more stable underlying asset, like a national currency some of the most popular stablecoins on the market peg to the U.S. dollar. For instance, most stablecoins are meant to be backed by real assets. That means that for every dollar-worth of a stablecoin, the exchange or the seller would need to set aside the equivalent in a real fiat currency, such as the dollar, or the equivalent amount in liquid cash.

That’s what is supposed to make them more “stable.” If the buyer of the stablecoin wanted to cash out of that virtual currency, it should be easy since the operator (like Circle Financial which is responsible for USDC) is supposed to have the money at hand, similar to how bank customers expect to be able to withdraw their money at any time. Moreover, stablecoins can help manage the volatility and retain value within the crypto market.

They grew in popularity and utility during the summer of DeFi in 2020 as stablecoins allowed market participants to move in and out of crypto trades very easily. This improves the usability of volatile cryptocurrencies and creates more liquidity in the crypto market. The direct peg to a more stable asset allows market participants to use stablecoins when crypto price fluctuations become too difficult to predict.

The different types of stablecoins are labeled according to their basic collateral design, fiat-backed, crypto-backed, commodity-backed, or algorithmic. Terra USD or UST is what is known as an algorithmic stablecoin. Unlike USDT, BUSD, and USDC, which hold fiat assets in reserve to back their tokens, UST relied on a complex set of codes, coupled with a LUNA token, to balance supply and demand and stabilize the price in the market.

Stablecoins can also be classified into different categories, primarily based on assets that are supporting them.

Stablecoins that are pegged against commodities generally have the backing of hard assets for stability. The hard assets could include real estate or gold. However, the most commonly used hard asset for collateralization of stablecoins is gold.

Fiat-backed cryptocurrencies are the most commonly accessible stablecoins. They are very popular, and you can find many of them in a list of stablecoins in 2021. As the name indicates, such types of stablecoin have the backing of fiat currencies such as the US Dollar, Euro, or Chinese Yuan, which are kept as collateral.

Seigniorage is generally under the governance of an algorithm or a process in comparison to a currency or asset. Here, smart contracts on decentralized platforms serve as an independent supporter for the Seigniorage-backed stablecoins.

There are currently 84 stablecoins in circulation with a combined market capitalization of more than 163 billion dollars. The majority of them are pegged to the US dollar.

Stablecoins can be judged by their structure and financial support. This helps investors understand the risks. Transparency is the key here, and arguably, USDC is the most transparent one, as it publishes monthly reports on the state of its reserves supporting the stablecoin.

USDC is fully backed by cash and short-dated U.S. government obligations so that it is always redeemable 1:1 for U.S. dollars. Each month, they publish reports by Grant Thornton regarding the reserve balances backing USDC.

USDT, or Tether, is a cryptocurrency stablecoin pegged to the U.S. dollar and is 100% supported by Tether’s reserves, according to its website. While this is debatable, there is still no proof that Tether does not have other reserves to back USDT.

BUSD is 100% supported by reserves held in either or both fiat cash in dedicated accounts at insured U.S. banks and U.S. Treasury bills. This would also include repurchase agreements and money-market funds invested in U.S. Treasury bills. So basically they are centralized or so-called Custodial stablecoins to decentralized stablecoins. Arguably, more like hybrid stablecoins where the collateral partly consists of centralized assets. Therefore, it is like a spectrum between both extremes.

Recent events with UST have shown us that some stablecoins have restrictions. Terra’s native token LUNA, one of the most valuable assets in the market, collapsed to nearly zero on May 12 after dropping 99% in 24 hours after the network’s stablecoin TerraUSD (UST) lost its dollar value. This then started a crypto bank run during which users sold large chunks of LUNA as fear of a collapse arose. Now, UST is worth less than $0.10, while LUNA has lost 99.99% of its value in a week.

As seen, USDT trades on 335 exchanges while USDC trades on 284. Below that line, we see only BUSD and DAI trading on more than 100 exchanges. Exchanges are putting their faith in these four stablecoins, and the trading volume seen below for each confirms that traders trust those stablecoins more. 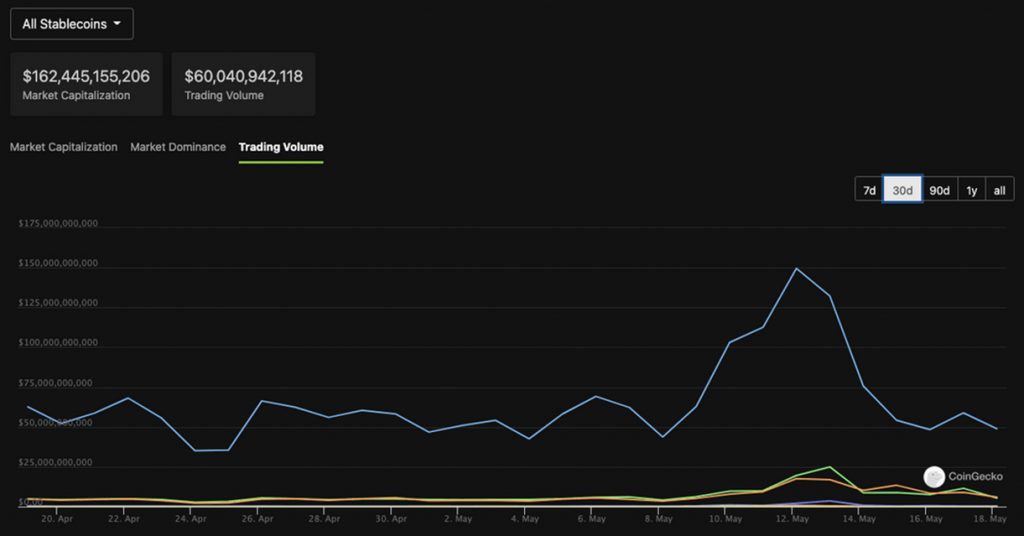 Over $40 billion in value has been wiped out by the dip of LUNA and UST. A lot of people got financially hurt in the collapse. Moreover, it is not confined to the Terra ecosystem. Some UST and LUNA holders may have been forced to liquidate their other holdings to make up for the shortfall, which lead to selling pressure and potentially brought the whole market down.

The collapse of UST has caught the attention of politicians, regulators, and industrial spectators in masses. While BTC and ETH made big drops in value during the week, the headlines were all about Terra.

What is the future of stablecoins?

All in all, the collapse of LUNA has highlighted many issues. First off, algorithmic coins are not viable at this point. They can only work with a minimum level of demand, and this cannot be guaranteed. Also, not all stablecoins are created equal. The market is favoring USDC over USDT. But are these stablecoins safe?

The fact that we have seen these coins maintain their peg even after these extreme situations is strong evidence of this. The fact that they are not backed 100% by hard cash. But this is the way banks and even central banks operate.

Lastly, the issue of governance seems important here. USDT is controlled by a foreign entity, while USDC is American-controlled which some investors seem to prefer. Meanwhile, DAI is a decentralized coin, which does seem fundamentally more attractive. Even though it is backed by a mix of assets, it is less clear how stable it is.

Authorities are concerned about stablecoins as they hold potential for future use. It will not only clean up the market space but make things more transparent for investors. Moreover, it will legitimize this billion-dollar industry further and potentially bring it out of the shadows.

Carlos Cano is D-CORE's Creative Lead and host of the Blockchain People podcast on D-CORE's platforms. He is a digital nomad and is responsible for all the creative materials you see from D-CORE. You can find him on Twitter.
May 20, 2022