Have you ever read the word scalability in a blockchain context without fully understanding what it means? Are you able to fully explain why and how existing blockchains should scale?

If your answer to any of these questions was a no, you might want to read ahead to update your knowledge.

Defining the importance of blockchain scalability.

As you might already know, blockchains are unique in the way that no one controls them. Architecturally decentralized when done correctly, these systems serve the purpose of allowing members of a network to trustlessly govern it, steering a blockchain protocol based on incentives.

Decentralization is useful because a properly decentralized system does have a single point of failure, getting rid of the problems an attack, or a component failing, would cause. A properly executed blockchain also has strategies to prevent collusion built into its code, making it hard for users to attack it from the inside.

However, this comes at a cost.

As it turns out, blockchains that fulfill the previous two (very much desired) features are difficult to scale. Scaling, in blockchain terms, refers to the act of growing the network to a point where it’s accessible and cheap to use and run without sacrificing security and decentralization.

And… surprise! This is quite difficult to do within existing models.

In fact, the problem is so big, that it is the single reason you continue to hear about solutions proposed to implement ‘while Ethereum 2.0 launches’. In the current state of affairs, several chains seem to exist solely for the reason that Ethereum is all too popular in its current form for its own good.

Ethereum’s creator, Vitalik Buterin, on his blog, has talked at length about this, coining what’s known as the scalability trilemma. This idea, as you can see in the picture below, states that only two of out of three features can be achieved by existing blockchains. 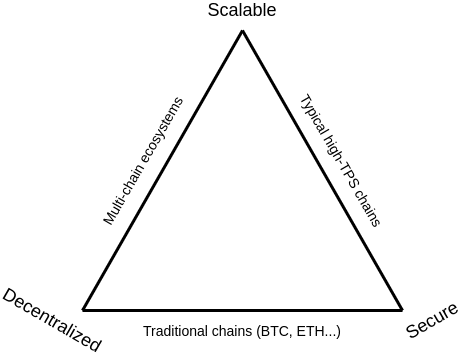 The blockchain scalability trilemma. The wording of this problem implies that only two of the three features can be achieved in current blockchains, sacrificing the other, without adding extra layers. (Source)

The three components play out as it follows:

The number of transactions that the chain can verify and how fast it does so. For our purposes, this could be considered ‘efficiency’. If a blockchain sacrifices scalability for the sake of security and decentralization, it might end up too expensive to use, which is the state of the Bitcoin network and Ethereum blockchain at times of high demand.

In this interview on our podcast, Minima’s founder, Paddy Cerri, makes a case for an all-encompassing chain run solely on mobile devices.

Decentralization entails that there is not a need for a small number of powerful actors to sustain the chain. This is important because, for the blockchain to remain trustworthy (and therefore trustless), no identifiable entity should hold power over it. Chains like Binance’s Smart Chain turn their centralized nature into a feature (with users relying on the central figure’s authority and name) to stay cheap and secure. The problem of this, of course, is that having a single point of failure is largely undesirable for blockchains, by nature.

An attack over a blockchain network should be too costly or too impractical to be attempted successfully. This can be due to the cryptographic strength, a high number of nodes securing it, or a combination of these and other factors. Chains that do not achieve security, despite being decentralized and scalable, one can easily argue, are dangerous for their users.

Why is it so difficult to create the most scalable blockchain?

Scaling is particularly difficult for secure and decentralized blockchains because, to be in a situation where a chain needs to scale (and where it can check both of the previous boxes), a couple of assumptions need to be met. As you will see, this is a fairly novel issue, as well.

Assumption #1: The blockchain is popular enough for it to need to scale

Few remember this in 2021, but there was a time when Bitcoin and Ethereum transactions were essentially free. This was, simply put, because the chains were at early stages of popularity, and the difficulty of mining their blocks was low enough for them to run inexpensively. You can think about it as a combination of high supply, ease of production, and low demand. Within these constraints, in the early days, there was little to no pressure to scale.

This is also why alternative chains have an easy time providing help with specific use cases in times of high need. For example if Ethereum is at its usage peak at a given time, then a not-so-popular chain like Tezos would probably help users transact faster and cheaper.

Assumption #2: The blockchain is at some level effective at its base Layer, which entails that it can’t scale naturally

The root of the blockchain scalability problem at hand.

Whether they use Proof-of-Work or Proof-of-Stake consensus mechanisms, traditional blockchains require a relatively high number of participants to run full nodes that verify every transaction. In this scenario, the number of participants influences the degree of decentralization and the strength of the encryption that every user consequently provides influences its security. As you can imagine, both factors create a synergy that feeds onto itself.

However, this model is not directly scalable for technical reasons that we will not fully describe for the sake of simplicity. It suffices to say that, as Vitalik Buterin (again) detailed in a rebuttal of Elon Musk’s proposal (which he called naive) to change Dogecoin’s features to make it scalable and fit for real world use, there is a cap on the technological requirements needed for security. Increasing these requirements would cause most users to be unable to run full nodes and make the chain unsafe and centralized.

Again, this is an issue that can get quite complex to explain. However, at its core, the cause for “traditional” blockchains not being able to scale without re-doing them completely is, simply, that we’re at incredibly early stages technologically. There has never been a point in History where this is so badly needed.

Successful chains that are completely decentralized, secure, and that (somewhat) live up to their purposes, like Bitcoin and Ethereum, struggle with scalability issues in blockchain. Bitcoin cannot, at its current stage, become a worldwide monetary system by itself. Ethereum, similarly, can run decentralized applications (dApps) and smart contracts, but cannot be the world’s supercomputer yet.

And solutions like Cardano, which aim to be perfect from the get-go, haven’t developed fast enough to be at all used for their ultimate purposes.

So, what are we doing to achieve Scalability in Cryptocurrency?

In this two-minute clip from our podcast, financial inclusion expert Nolwazi Hlophe argues for the importance of payments systems in helping the unbanked to join the financial landscape.

Blockchain innovation aims to create technologic tools to decentralize everything within reason. We have established that this can only be done through scalability related projects (imagine, otherwise, a decentralized Youtube where you’d have to pay $17 in ETH because of the transaction fees to tip a creator $0.5, without taking into account the long time it would take for this transaction), so it’s only fair that we now focus on the proposed solutions.

In the future we plan to do an article covering all types of scalability solutions. However, for now, we can conclude by mentioning two ideas that are currently leading the change: Fundamentally changing the chains and Layer-2 solutions such as the Lightning Network. Each has their implications, strengths, and weaknesses, which is why, at this stage, we need to think of which one’s best suited for whatever application we have in mind.

Remember that we mentioned how a lot of solutions are proposed “while Ethereum 2.0 launches”?

Well, this is because simply put, Ethereum is going through major efforts to revamp and update its chain to accommodate high demand. However, be mindful that this is only possible within Ethereum because it has a strong leadership and a community mindset friendly to hard-forking their chain. Other protocols and their users (like Bitcoins’) would consider this unthinkable.

Making base changes involves much testing, development of new technologies, governance discussions, re-testing and uncertainty. Therefore, it’s not far-fetched for these efforts to take their time, ETH 2.0 being a clear testament of this as well. With Ethereum’s update, the Foundation plans to introduce sharding, a new technique to process computation promising a 100,000x in transaction speed. Other projects plan on introducing sharded chains as well, but their development has taken so long that they have not managed to pose a threat to Ethereum.

Ultimately, blockchains will have to evolve to power all kind of decentralized applications. 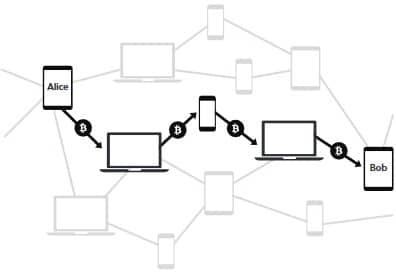 Layer 2 blockchains are systems that confirm small transactions more quickly and aim to reduce traffic on the main network. Basically, they’re separate chains that run along with their counterparties and bounce data off them to make contributions.

The main Layer-2 for Bitcoin blockchain is known as the Lightning Network. Ethereum uses ‘rollups’. These solutions can be valid even if the base chains are fundamentally altered, and therefore can help ease scalability in cryptocurrency. For example, the Lightning Network, which works by creating settlement channels similar to keeping tabs over fixed periods to settle debts and payments once they accumulate (which is, in essence, what credit card companies do), can help users transact with the Bitcoin network near-instantly.

L-2s are important these days since they enable dApps to get launched, tested, and build user bases without waiting for better blockchains to launch or for the existing ones to be upgraded. However, they’re likely to continue around in one way or another even after blockchain technologys achievesachieve high-speed processing because they help make non-pressing settlements more efficient.

Carlos Cano is D-CORE's Creative Lead and host of the Blockchain People podcast on D-CORE's platforms. He is a digital nomad and is responsible for all the creative materials you see from D-CORE. You can find him on Twitter.
August 14, 2021