As members of the blockchain community, we often hear about organisations around the world that are dedicated to developing, studying, and promoting this technology and its use cases. These organisations don’t often get the same press that private companies do, despite their sometimes impressive boards featuring scientists, professors, and researchers that are highly accomplished within their fields.

And, perhaps even more worryingly that not getting enough press, most people do not understand what these associations do in practice.

So, we brought in the perfect person to help remedy this.

We interviewed (sorry guys, no Youtube this time!) Dr Naseem Naqvi, President of the British Blockchain Association (BBA), which works in collaboration with organisations such as the British Department of International Trade, Enterprise Ethereum Alliance, as well as a great number of universities and other blockchain associations. Naseem, a Medical Doctor that still works full time at a hospital, also holds a position in the Centre for Evidence-Based Blockchain and is an Editor in Chief for the BBA’s scientific Journal. As it reads on their official website, the British Blockchain Association:

‘(is) the world’s most prestigious and the most influential voice on Blockchain. Established in 2017, BBA has quickly become the leading global association for blockchain with extensive network presence in six continents.

BBA promotes Evidence Based adoption of Blockchain and other Distributed Ledger Technologies (DLT).

We are home to the Centre for Evidence Based Blockchain (CEBB), The Journal of the British Blockchain Association (JBBA), Student Forum (BBA SF) and the Industry Advisory Think-Tank.’

What follows is a compilation of the highlights of our interview, edited for readability and length purposes. Naseem, an interviewee that instantly stands out as one of the best we’ve had on our blog, promised to be back for a second round, so make sure to subscribe either to our platform or Youtube channel to see more of him! 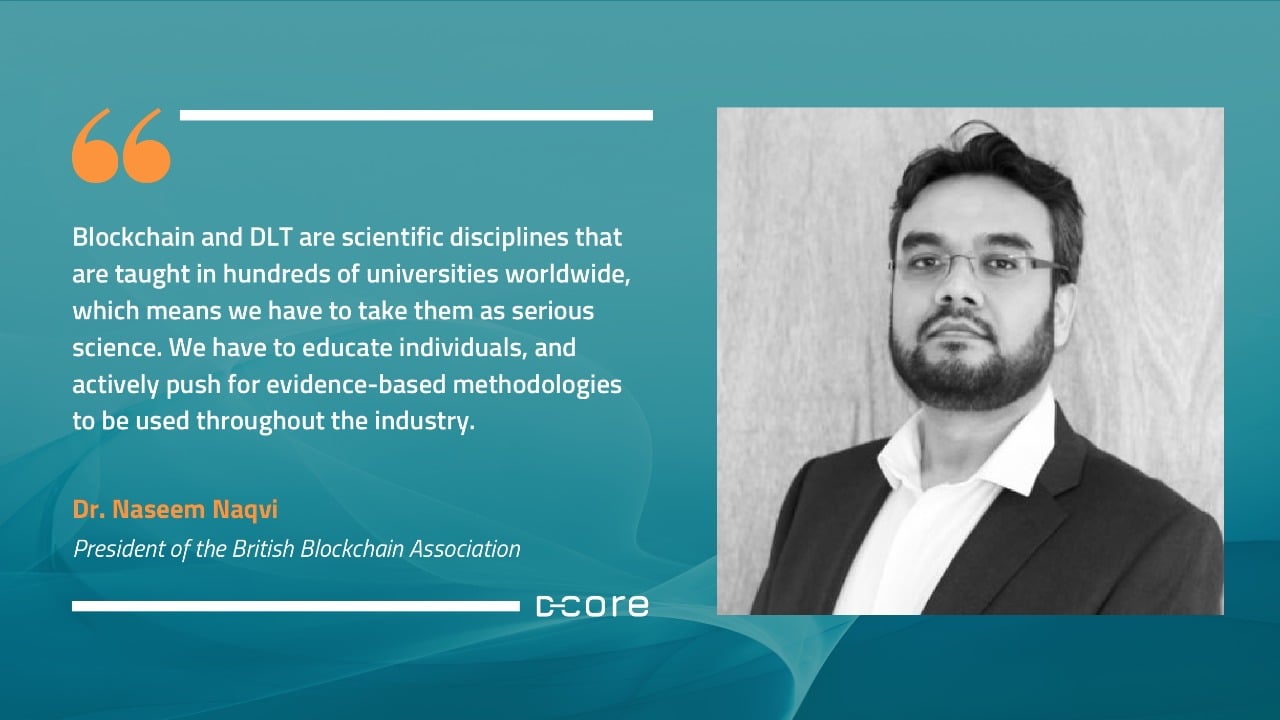 If you take away only one thing from this interview,  make sure that that is treating blockchain as a serious scientific discipline.

Carlos Cano – D-CORE (CC): Naseem, thank you so much for doing this interview. Would you like to introduce the BBA’s mission and vision, since you’re probably the best person in the world to do so?

So, I first learned about blockchain amid the ICO hype, because I was invited to attend the presentation of a blockchain-based solution. Something that immediately struck me was that, first of all, there was a tremendous amount of hype around this, which was severely unjustified. The second thing, and this one hit me once I read more about the technology and became convinced about the revolutionary potential of trustless systems, was that there was very little evidence and science behind these projects. Even worse, there were no organisations in the UK, or even in the world, trying to promote better scientific practices in blockchain. So, in 2017, along with only two people, I started this Association to help move the space forwards, and I’m pretty happily surprised to see how quickly we’ve become a global thing.

Basically, at the BBA, what we aim to do is bridge the gap between Academia and Industry. We see a critical need for better understanding and better science in the current landscape, which is why we also foster research, with the 1st peer-reviewed Journal on the topic. Our Journal, the JBBA, can be found online but is also available on print. As an organisation, we also host forums and have done conferences: our JBBA editors and reviewers are in over 57 countries, with more than 150 researchers, some of them by Ethereum, Consensys, and other blockchain enterprises that have published their work with us. All around, I can say we keep pretty busy, as I do myself… some say I fix technology by night and human bodies during the day!

CC: Ha! you should definitely make that a tagline on your website. And so, with so many faulty science and unsupported claims floating around, what are the practical steps that an organisation like the BBA helps us take to make the system better?

NN: So, just like if as a doctor you come to me with a problem in your body I have to first understand the issue and then prescribe treatment, it is very important to have a scientific understanding of blockchain and its environment. And, since we’re dealing with hard science, the information backing it is crucial. A treatment, ideally, has to be backed by solid information derived from evidence and science, not the doctor’s (or anyone’s) personal beliefs. With emerging technologies, however, there is a lack of specific frameworks that use the correct filters. You can say, in this respect, that:

So, to get to well-filtered information, there is a clear process that we have to follow:

We see that, in blockchain, many people try to jump steps, and that ends up creating a lot of problems. To see if a solution does work and is worth it, it has to be put to the test in the real world, at scale, and this can be through public service, in an institution, private company, etc. For it then to be valuable, and for politicians, governments, etc. to endorse these technologies, the solutions have to be significantly and perceivably better than current alternatives.

CC: And, it’s important to say, the whole concept is predicated upon the fact that it IS possible to improve the current systems.

NN: Exactly. The Cynics in the world preach that blockchain itself is rotten to the core because of bad practices in the industry. However, blaming the technology is blaming a tool, is like blaming electricity for someone getting electrocuted. What matters is what we do with technology and the applications that we create for it.

CC: Then I guess it is only natural to wonder where we would be if this science was more widely applied.

NN: So, and this is very important, science is a belief in the ignorance of experts. Science is mostly a process to continuously figure out why and where our knowledge is wrong, as opposed to trying to impose a dogma. This way, things take time, but everyone that can oppose an idea can do so, and then, when the people that try to prove you wrong end up proving you right, the system is ready to move forwards. What currently holds us back, is a rather polarised relationship between two extremes: The Cynics that don’t understand science, make quick judgements, are married to the idea that things cannot be improved, and then the Hype. The Hype, of course, is moved by people with vested interests, something to gain, and is extremely hurtful because it promotes ideas that shouldn’t otherwise make it to the public.

CC: This almost perfectly relates to the Journal, doesn’t it?

NN: Well, since you’re setting me up, it is essential to clarify what the Journal is. We collaborate with a lot of researchers, some of them with a very high profile, to put scientific research about the technology and the industry forwards. This means that we are not a media outlet. We are not a blog, magazine, etc. Peer-reviewed journals, such as ours, are the quality benchmarks of most sciences and the bedrock of scientific evidence, with independent scholars anonymously (hence the term ‘double-blind’) reviewing each other’s work to filter out bad science.

CC: And, of course, this goes hand in hand with the idea of trustless systems behind blockchain.

NN: Of course! And, as you point out, this means we need to keep using science as a base for everything. Only that way we can solve better problems with better solutions, ask better questions with better answers, and be transparent. In this way, everyone can practice evidence-based blockchain. Blockchain and DLT are scientific disciplines that are taught in hundreds of universities worldwide, which means we have to take them as serious scientific disciplines. We have to educate individuals, and actively push for evidence-based science to be used throughout the industry. 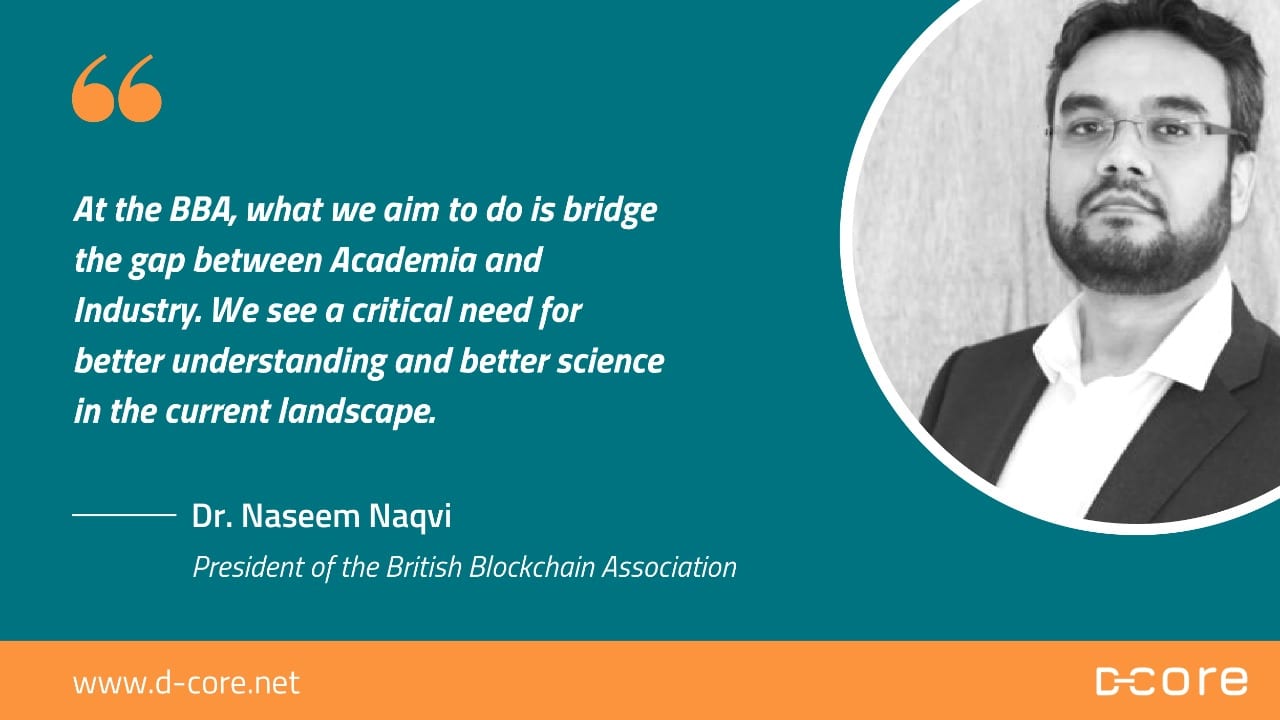 One thing that struck us from Naseem’s vision is the idea to promote science as a method above all entities and industries.

Above everything, stay scientific.

We can say that interviewing Naseem was an enlightening thing to do, and that thanks to him, and organisations such as the BBA, the blockchain ecosystem can and will advance to constantly improve itself.

Carlos Cano is D-CORE's Creative Lead and host of the Blockchain People podcast on D-CORE's platforms. He is a digital nomad and is responsible for all the creative materials you see from D-CORE. You can find him on Twitter.
October 6, 2020